Rink Think 101: A Guide To Mental Prep For Hockey
Fifteen years after Eminem released his famous song, Lose Yourself, it still pops up on pregame mixes for a reason: It is as good a distillation of mental preparation as you’ll find because the song brings your to a moment with calm intensity, shutting out distraction, and unleashing your preparation and passion at precisely the right time.

“You better lose yourself in the music, the moment
You own it, you better never let it go.
You only get one shot, do not miss your chance to blow,
This opportunity comes once in a lifetime …”
Michael Phelps pumped Eminem through his earbuds at the Rio Olympics. In 2016, Barack Obama was captured backstage bobbing his head to the tune before he addressed the Democratic National Convention.
Eminem’s music may not be for everyone. Though mental preparation, as much as all the physical conditioning and skill development, is crucial for athletes. None more so than hockey players, whose sport requires channeled aggression; fast-twitch response to physical and mental affronts; and a well-worked on/off switch like no other.
You can train your mind as well as your legs and lungs.
What’s the Goal? Most of us are playing against opponents of similar physical gifts. When the talent is leveled, the place to find an edge is in oft-overlooked mental training. Yes, a tactical game plan is important, but so is increased self-confidence and focus.
Here are a few ways to do that: 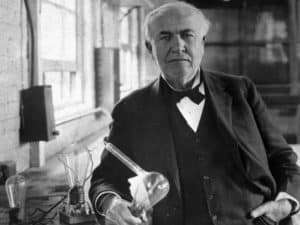 Thomas Edison failed many times while trying to find a long-lasting, relatively cool-burning filament for the electric light bulb. While he likely never said, “I have not failed 1,000 times. I have successfully discovered 1,000 ways to NOT make a light bulb,” the points of the apocryphal quote are sound.
It is possible to learn something while not succeeding, and it is possible to view a negative in a positive light. In other words, don’t be afraid to shoot. Accept that missed shots happen, be grateful that you’re getting scoring chances, and believe that the next shot will score.

Mindfulness Leads to the ‘Zone’
A major study linked mindfulness with feeling a higher state of flow — that feeling of being totally in the moment, which translates to the “zone,” where the net looks huge, your legs feel light, and the puck seems always to find and leave your blade exactly as you would have it.
You can enhance your mindfulness with these simple practices:

Have a Preset Reset
When the game is on, sometimes all that visualization and positivity and Fluffernutter gets checked right out of you. You’ve got to find a way to center yourself, to gather yourself. A mantra can do that.
A mantra is a repeated set of words or sounds used to bring the focus in meditating. Mantras can also be reassurances in the heat of the moment. If you’ve been repeating “I am strong” before each set in the gym, or as you do cardio, repeating those words as you gather yourself after being checked into the boards can reset your focus.
It helps when Eminem isn’t handy.
A special thank you our friends at Pro Stock Hockey a one-stop shop for all things hockey-Never buys retail again.
Author bio: AJ Lee is Marketing Coordinator for Pro Stock Hockey, an online resource for pro stock hockey equipment. He was born and raised in the southwest suburbs of Chicago and has been a huge Blackhawks fan his entire life. Lee picked up his first hockey stick at age 3 and hasn’t put it down yet.